Pilgrimage is almost as old as the hills - or at least as old as humanity. It is essentially an act of devotion that involves oneself, nature and God in an intimate and fundamental way. There are many reasons for going on a pilgrimage, just as there are many forms of religion, but pilgrimage doesn't have to be religious, in the sense of the formally organised religions. It can be and usually is very personal. Basically it involves a calling to travel from one place to another, to reach a goal that for some reason appears to be sacred, special, in a profound way.

Many of these special places have been marked by some religion or other, for their own particular reasons. Some of them have great churches or temples on them, housing relics or the memory of a saint. This tends to increase their attraction to pilgrims and give them a more rational reason for going there, but these holy places don't have to have such markers. Most of them are already holy without being marked by man in such ways. They are the sacred places of the earth, the chakras and energy points of the planetary body. It is the earth, or the spirit embodied in the earth, the spirit of place, that calls us to it. The journey represents the path back to the Beloved, the Spirit - the path back to God.

One doesn't have to pilgrimage, of course, to find God; but the earth needs it. We are born to move. Movement is akin to emotion, which is motion or movement, and movement is energy. Perfect emotion is love, and perfect energy is the life force. Such movement is a movement of love, bearing love like a holy breath to all parts of the body visited in this way.

It is said (and can be observed clairvoyantly) that a true pilgrim who pilgrimages in such love leaves footprints of light. Many pilgrims leave many such footprints, and a well-walked pilgrims' way can become a path of light. There are multitudes of pilgrimage routes crossing the earth, with thousands of people pilgrimaging them every year. The earth is, in this way, made into a network of light. Its darkness is turned to light. It is a healing, uplifting and inspirational process, both for the pilgrim and for the planet.

There is a science to pilgrimage. One doesn't have to know this to be a pilgrim; but a conscious, loving pilgrim has a far greater beneficial effect on the planet, and thus on humanity and all creatures, than an unconscious one. This science concerns the earth and its landscape, which in its own way is akin to the human body, with its etheric energy structure of meridians, acupuncture points, chakras and 'kundalini' energy flows. This in turn is structured according to the three great Archetypes which produce such things as landscape temples with their own chakra systems, 'trees of life' and zodiacs.

The science also involves the angelic realm, and there are such things as landscape angels. One could call these the spirits of the places. Each is an aspect of the whole—a facet of the One Being. Each of them is a teacher, a representative of the One Teacher. In such ways nature teaches us the wisdom and takes us into a story that is a mystery. 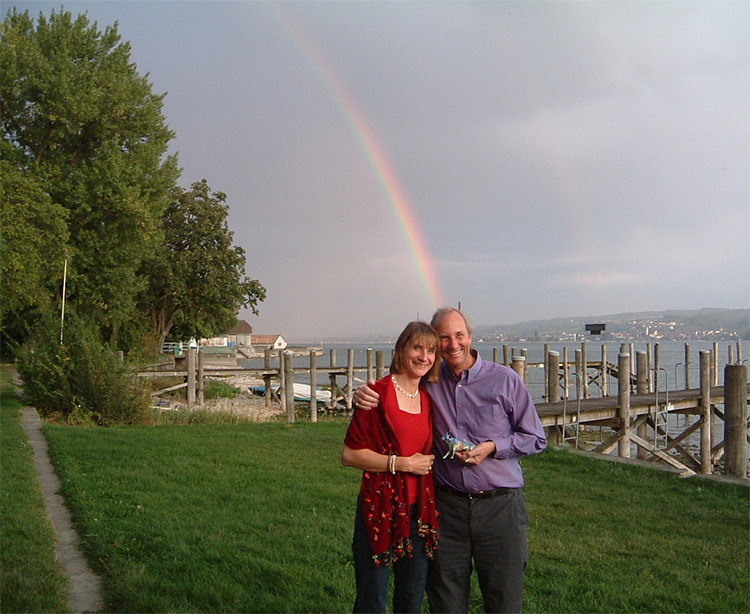 The rainbow's end!
Peter and Sarah on the island of Reichenau, Lake Constance, at the culmination of the Heart of Europe Pilgrimage 2003. Rainbows often appear at key moments in such pilgrimages.

This particular pilgrimage began the series of pilgrimages to the major chakras of the 'Bull' of Europe, as part of the mystery in which we are involved.

Europe takes its name from the myth of Europa and the Bull, which is essentially a great mystery in the process of being acted out by all of Europe in a cultural and political way. 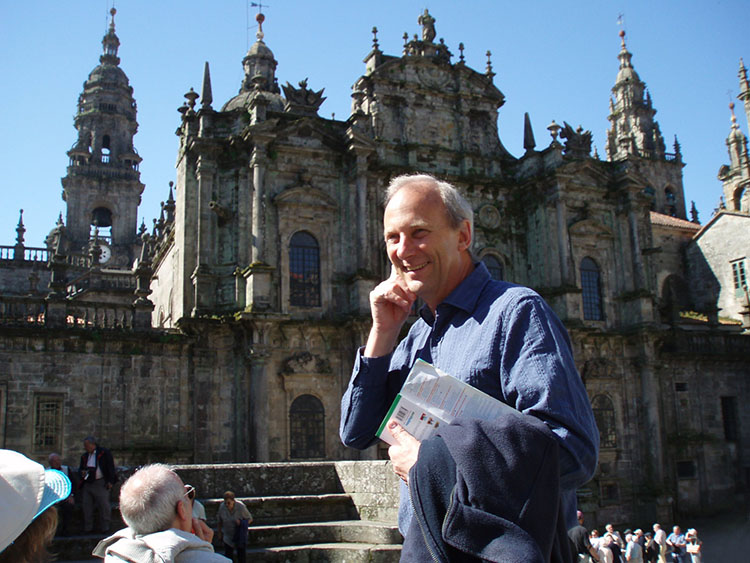 Peter in Santiago during the 'Crown of Glory' Spanish Pilgrimage 2006. Santiago de Compostela marks the crown chakra of Europe. 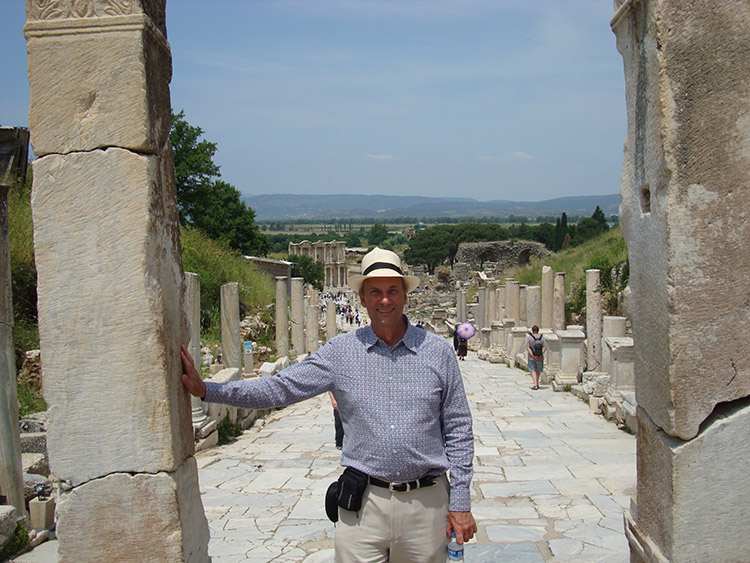