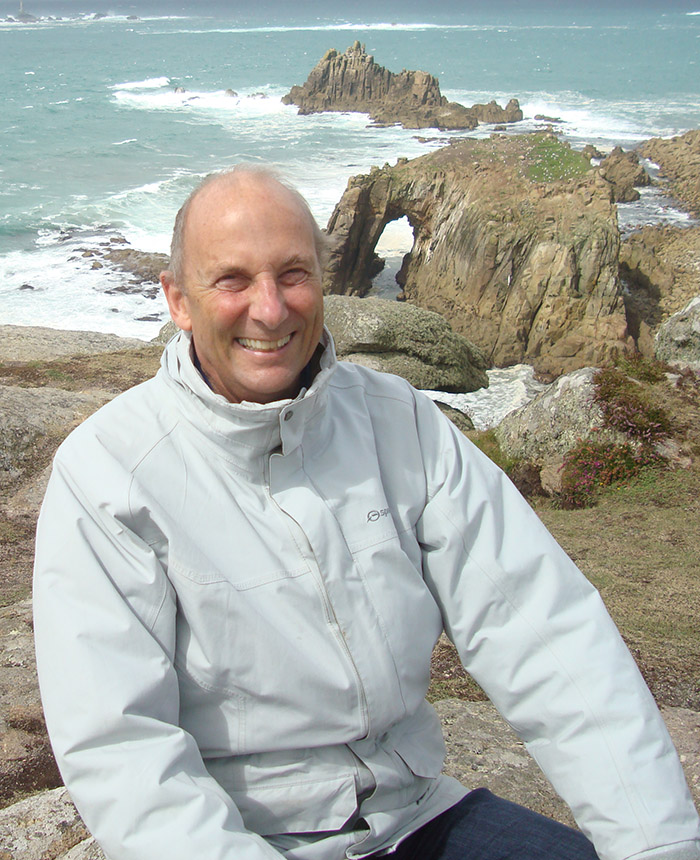 Peter Dawkins (born 12 November 1945) is a philosopher, seer, geomancer, historian, author, lecturer, workshop leader and teacher. In particular he is a specialist in landscape temples and sacred space, the Western wisdom traditions, the matter of Britain, and Baconian and Shakespearean studies.

After practising as an architect for nine years in both England and Scotland, from 1978 onwards Peter has devoted himself full-time to research, education and healing work in connection with the world’s wisdom traditions, mythology, architecture and landscape, with an especial focus on the intimate relationship between the human being, the landscape and the spiritual realms.

Peter teaches, runs courses and leads wisdom tours and geocosmological pilgrimages in several countries. He has written many books, newsletters and articles, advised teachers, actors, directors and film-makers, and been interviewed internationally on TV, radio and documentaries.

Peter is founder and principal of The Francis Bacon Research Trust, co-founder and elder of Gatekeeper Trust, and founder of the Zoence Academy and Mystery School which he runs in partnership with his wife Sarah. He has also served as a council member of the Francis Bacon Society, a trustee of the Shakespearean Authorship Trust (2002-2013), and a trustee and honorary president of the British Council of the UN University for Peace (1986-7).

Born Anthony Peter Dawkins in Birmingham, England, the son and eldest child of David George Dawkins and Jeanne Mary Jefferies, but called Peter from birth, he has one sister, Sally, wife of John Stenning. From childhood he has always had an artistic and visionary gift, including the ability to see angels, etc., which has never left him, but developed further over the years.

Whilst at Cambridge Peter played as a drummer in the South Side Jazz Band and took part in rowing eights. His other main interests were hill-walking and exploring the landscape, sacred and megalithic architecture, classical philosophy and the ancient wisdom traditions.

It was during this time that he began to appreciate the powerful effect that the environment has on people in different ways, including health, consciousness and behaviour, and therefore where best to build or not to build, etc., and thought that there should be a proper science concerning this. He also began to perceive earth energies and chakra systems in the landscape. At this time he had no idea of where these insights would eventually lead him, especially as at first the prevailing milieu made it difficult to talk about these things openly.

After Cambridge Peter entered architectural practice, first with A. G. Sheppard Fidler & Associates in their Birmingham office (1969-1972), becoming a registered architect in October 1971), then with Rowand Anderson Kininmonth & Paul in their Edinburgh office (1972-6), and finally with The Scottish Special Housing Association (1976-8), working in both Edinburgh and Glasgow.

During this time Peter continued his landscape researches and wisdom studies, together with meditation and other spiritual practices. In addition, shortly after marrying in March 1973, he was given instructions in a dream that threw him directly into research work concerning the philosopher Francis Bacon and the Rosicrucians, and the rich heritage that they have left for us today. Then, in 1978, following another inner calling given in meditation and vision, Peter left the practice of architecture to devote himself full-time to research and educational work in connection with the wisdom traditions, the Baconian, Rosicrucian and Shakespeare mysteries, and the landscape.

By this time Peter had met Sir George Trevelyan who invited him to speak at Wrekin Trust events, encouraged him to make his landscape research and discoveries known publicly, and introduced him to the poetry and wisdom of Shakespeare. In this way Peter started to become a lecturer and teacher. He had also met Hope Brameld, secretary of the Francis Bacon Society, and the research work started with her in 1973 led eventually, with the help of the Marquess of Northampton and others, to the founding of the Francis Bacon Research Trust as an educational charity in 1980. Peter also met Stanley Messenger in the 1970s and, together with him and a group of friends, started a movement that gave rise to the Gatekeeper Trust, registered as an educational charity in 1982.

From 1980 onwards Peter’s public educational work started in earnest, first of all by means of the FBRT and Gatekeeper Trust, and then also with Zoence Academy, co-founded with his wife Sarah in 1994.

The philosophy and wisdom embodied in the Shakespeare plays has been an important part of Peter’s studies, and as a result he has given Wisdom of Shakespeare seminars, summer schools and other events since the mid-1980s, first with Sir George Trevelyan in Warwickshire, then with Mark Rylance at the Shakespeare Globe Theatre, London (1997-2005), and since then with Mark Rylance, Jill Line, Marianne Sagasti, Sarah Salmon or Julia Cleave in London, Warwickshire and Italy.